The flagship event of the Oklahoma Foundation for Excellence is its annual Academic Awards Celebration, which honors 100 of the state’s top public high school seniors and five exceptional educators. The gala event – broadcast statewide on public television – has been called the “Academy Awards” of public education in Oklahoma.

Since 1987, the foundation has selected 100 graduating seniors annually as Academic All-Staters. This prestigious award provides each recipient with a merit-based scholarship and medallion. The selection of Academic All-Staters has been described as Oklahoma’s “most rigorous academic competition.”

The celebration also salutes educators who are making exceptional contributions to public education in Oklahoma. Medal for Excellence Awards are presented annually to one educator in each of the following categories:

We encourage our registered guests to use the Center Parkade for free parking for our event. This is the Cox Business Convention Center’s Parking Garage, located on the north side of the Cox Center at 550 W. 3rd Street between Houston Ave. and Frisco Ave. Exit I-244 for Downtown Tulsa on W. 7th Street. Turn left on S. Houston, then right on W. 3rd.  The Parking Garage will be on your right.  There will be signage inside the Parking Garage that will direct you to the Grand Hall, where we are holding our event. 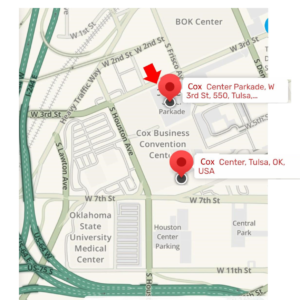 In lieu of an in-person Academic Awards Celebration, the foundation partnered with OETA last year to host a very special tribute to 2020 honorees. We look forward to hosting an in-person celebration in Tulsa this year, which will have limited attendance and follow COVID safety precautions for the safety of our honorees and guests.