Agnes, an Enslaved Woman at the Peyton Randolph House

Join Agnes, a woman legally enslaved to the late Peyton Randolph, as she reflects on her life and considers her present and her future. Examine what civil discourse and civic action means to a person who was enslaved and learn about how you as a modern person can take action to make positive change.

About Deirdre Jones Cardwell
Cardwell works as a programming lead actor interpreter for the Colonial Williamsburg Foundation. She began working at the foundation full time in June 2008 after graduating from the College of William and Mary with a Bachelor of Arts in Theater. Over the years, she has written and performed in scenes, created interpretations and programs, as well as collaborated with people from around the foundation and the community of Williamsburg. Cardwell enjoys a variety of interests and is grateful for opportunities to grow and serve.

Session Moderator: Rachel Honchul is a coordinator and trainer for the Bob and Marion Wilson Teacher Institute of Colonial Williamsburg. 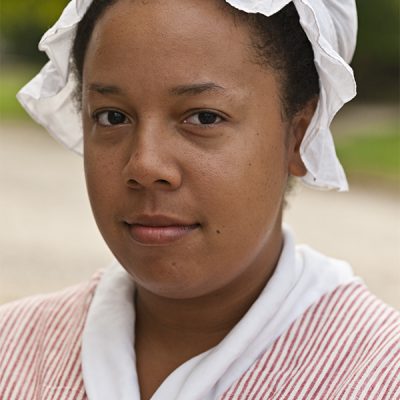 The Declaration of Independence asserts that ‘all men are created equal’ and are endowed with certain unalienable rights – ‘life, liberty and the pursuit of happiness’. When those words were written, over 52 percent of Williamsburg’s population was enslaved. This is a special release of “Created Equal,” a museum theatre exploration of African American perspectives on the Declaration, the revolutions it inspired, and the ongoing struggle for equality and freedom in America. It first premiered live on stage at Colonial Williamsburg on July 4th, 2019.

Tour the Peyton Randolph House in 360 degrees and encounter live-action portrayals of many of the 27 individuals enslaved in this 18th century home. This is not a tour of a building, but an opportunity to connect with people’s humanity, their lives, and their lived experiences for which the house was simply a backdrop.

Enslaved African Americans resisted their enslavement in a variety of ways. The major slave rebellions in American history reflected a desire for freedom and a knowledge of contemporary political events. These failed attempts to secure freedom and end slavery had wide-ranging repercussions.

In this lesson, students read advertisements placed in the Virginia Gazette by slave owners for the return of freedom-seeking enslaved people, then summarize the information and use it to make inferences about slavery in 18th-century Virginia.

Dunmore’s Proclamation in 1775 offered freedom to slaves of patriot sympathizers if they were willing to bear arms and fight for the British. His offer forever changed the lives of many enslaved people and their masters.

Students perform a close reading of Dunmore’s Proclamation to determine Dunmore’s arguments and reasoning, the context of the document, and the proclamation’s possible effect on Virginians. In the second lesson, they examine a letter that appeared in Dixon and Hunter’s Virginia Gazette on November 5, 1775. (Although the letter predated the publication of Dunmore’s Proclamation, the contents of the proclamation were common knowledge before it officially appeared in the newspapers.) “In lesson three, “By Word of Mouth,” students pass messages verbally to experience the importance of careful listening and repetition in oral societies