Benjamin Franklin was a printer, inventor, statesman, and our oldest founding father. As an inventor, he was very practical. If he needed something that was not available, he invented it. He invented a better stove, so he did not have to chop so much wood. He loved his rocking chair, so he made it do chores while he rocked. He also invented bifocals for his changing eyes. Proving that lightning and static electricity are the same was the discovery that made Ben Franklin the only internationally known scientist in the colonies.

During Franklin’s lifetime, he was responsible for many positive changes throughout the colonies and around the world. Many of his ideas are still impacting us today. Interact with Ben Franklin as he provides us with a window into the past. His knowledge and accomplishments are sure to inspire our leaders of tomorrow!

About Stephen Smith
A popular performer at Colonial Day at the Capitol, Smith describes himself as an “edutainer,” presenting a fun and fascinating look at Benjamin Franklin as a statesman, scientist, publisher and printer. Smith earned his bachelor’s degree in technical theater from Oklahoma City University and later earned his master’s degree in religion with an emphasis in communication from United Theological Seminary. His acting career has taken him to locations throughout the United States and to Russia. He served many years as a State Arts Council Artist-in-Residence and portrays a variety of characters, from inventor Orville Wright to the wacky scientist Professor B. Looney. 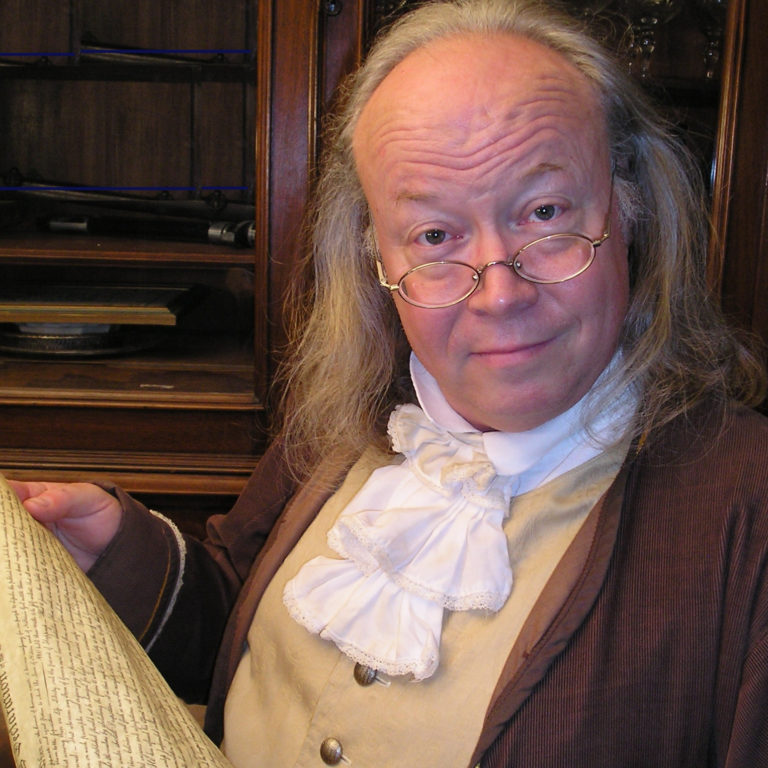 Franklin’s widespread interests and numerous fields of endeavor make him the American epitome of the Age of Enlightenment. In this lesson, students reflect on the parallels between our own age and the one in which Franklin lived and worked. After viewing a short video about Franklin, they read some of Franklin’s adages through an Enlightenment lens and examine a symbol-rich portrait of Franklin. The lesson culminates with students imagining Benjamin Franklin’s present-day social media presence.

Students gain an understanding of the life and times of Benjamin Franklin in a series of activities that carry Franklin’s ideas to the present day.

Included in this link are free printables for understanding the quotations of Ben Franklin, a Magic Square grid activity; a lesson on inventions; and a lesson examining Franklin’s “Join or Die” political cartoon, where students create their own political cartoon.

Following the defeat of the British at Yorktown, peace talks began in Paris to negotiate the terms for a treaty to formally end the Revolutionary War. Benjamin Franklin, John Adams, and John Jay were among the negotiators for the United States. In this lesson, students view videos to hear the various proposals that were presented to resolve issues surrounding the conflict and learn the provisions that were included in the final agreement that was signed between Britain and the United States.