Join Martha Washington as she reflects on her public and private life and the different legacies she left on American history. During this engaging program, students will analyze sources, explore multiple perspectives, and reflect on how actions from the past still impact lives today.

About Elizabeth Keaney
Elizabeth Keaney, who portrays Martha Washington, is a museum educator with experience in history, art, science, and encyclopedic museums from the D.C. region to Alaska. Having first worked at Mount Vernon beginning in 2004, she has taught in nearly every part of the Estate including the Pioneer Farm and Education Center. Beginning in 2006, she began an apprenticeship under Mary Wiseman, the former Artistic Director for Character Development at Colonial Williamsburg and portrayer of Martha Washington for more than 25 years. In 2009, Keaney earned her M.A.T. in Museum Education from the George Washington University and has created and facilitated teacher professional development programs at National Museum of Women in the Arts, the Anchorage Museum, and the Palm Springs Art Museum.

Session Moderator: Sadie Troy is the manager for Student Learning for the Education Department at George Washington’s Mount Vernon. 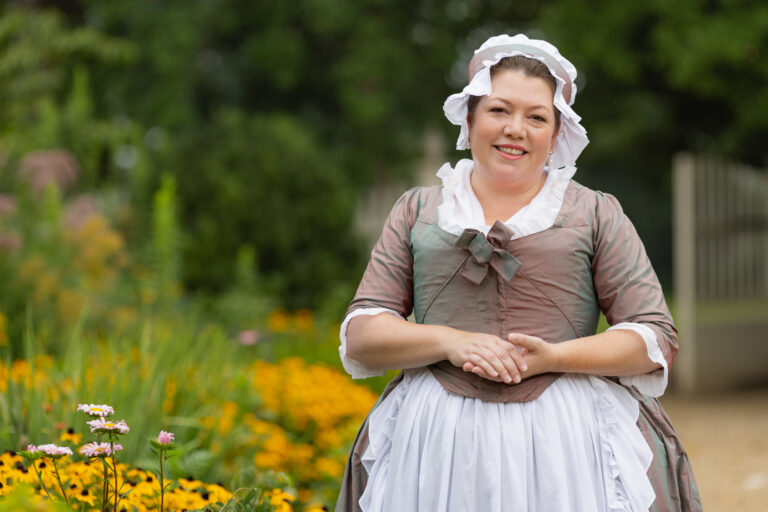 Even before she became the First Lady, Martha Washington led a fascinating life. Explore the timeline and learn about her first marriage to Daniel Parke Custis, her beloved children and grandchildren, and her incredible relationship with the Father of our Country.

A series of lesson plans that use Martha Washington as a case study to integrate women’s history into the events of the American Revolution and the New Nation historical eras.

Martha Washington’s presence at the Continental Army’s winter encampments not only helped encourage George Washington but also boosted the morale of the entire camp.

In this lesson, students read and analyze an obituary for Martha Washington printed in the Augusta Herald on June 9, 1802.