OKLAHOMA CITY – More than 300 Oklahoma students will travel back in time and meet such historical figures as Revolutionary War hero James Armistead Lafayette and Benjamin Franklin during the 18th annual Colonial Day, slated Friday, Feb. 7, at the Oklahoma History Center, 800 Nazih Zuhdi Dr., Oklahoma City. The program is presented by Colonial Williamsburg and George Washington teacher institute alumni in partnership with the Oklahoma Foundation for Excellence.

Students from Cherokee, Enid, Norman, Oakdale, Oklahoma City and Putnam City public schools will be dressed in colonial-period attire for the hands-on history education event. Activities will take place from 9:15 a.m. to 1:40 p.m. at the Oklahoma History Center. Due to renovations at the State Capitol – the traditional location for Colonial Day – the event is being hosted this year by the Oklahoma History Center, which has been a longtime participant in Colonial Day educational programming.

Students will have the opportunity to interact with people from the past – portrayed by historical interpreters – and participate in such teacher-led sessions as colonial dancing, period games, tin smithing and Native American history. The day will include a student-led Bill of Rights song during opening ceremonies in the Devon Great Hall.

“Colonial Day is an engaging and action-packed day of learning that brings early American history to life for Oklahoma students,” said Colonial Day Director Teresa Potter, a teacher at Oakdale Elementary School in EDMOND. “We are grateful to the many teachers, volunteers and sponsors who make this learning experience possible and appreciate the Oklahoma History Center hosting this year’s event.”

The Oklahoma Foundation for Excellence will recognize the winner of its Colonial Day Literature Contest during opening ceremonies at 9:15 a.m. in the House of Representatives Chambers. Colonial Williamsburg’s James Armistead Lafayette will present a plaque and $100 to literature contest winner Charlie Balthrop of Eisenhower Elementary School in NORMAN. The theme of the annual contest is “What It Means to Be an American.”

Major funding for Colonial Day at the Capitol is provided by a grant from Oklahoma Humanities and the National Endowment for the Humanities. The event is also made possible with support from Aunt Pittypat’s Catering, the Colonial Williamsburg Foundation, Embassy Suites by Hilton Oklahoma City Northwest, George Washington’s Mount Vernon Estate and Gardens, Mattocks Printing Co., the National Society of the Colonial Dames of America in the State of Oklahoma, the Oklahoma History Center, the Oklahoma Society of the Daughters of the American Revolution, Charles L. Oppenheim,  and the Oklahoma Foundation for Excellence. 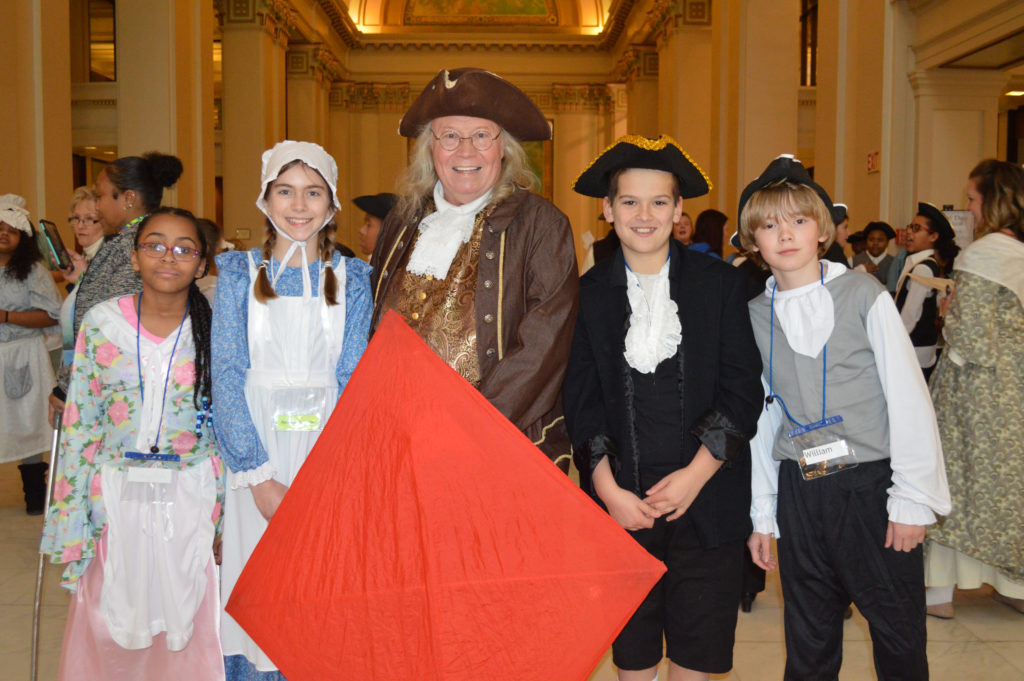